Hi everyone! I’ve been married for 10 years and I thought that I knew everything about my husband’s preferences in terms of women’s makeup, like, for example, the fact that he doesn’t like dark lipstick or when the foundation is visible on the skin. 90% of the time I don’t have any makeup on and every day he sees me exactly like this. I only put on makeup when I really want to or when I’m going out.

We at Bright Side really like experiments — but you already know that. That’s why I’ve decided to do a small experiment of my own and suggest my colleagues to do the same. It’s simple: I wanted to find out what men like to see their wives or girlfriends wearing when they go out together, and I’ve learned something I didn’t know before. 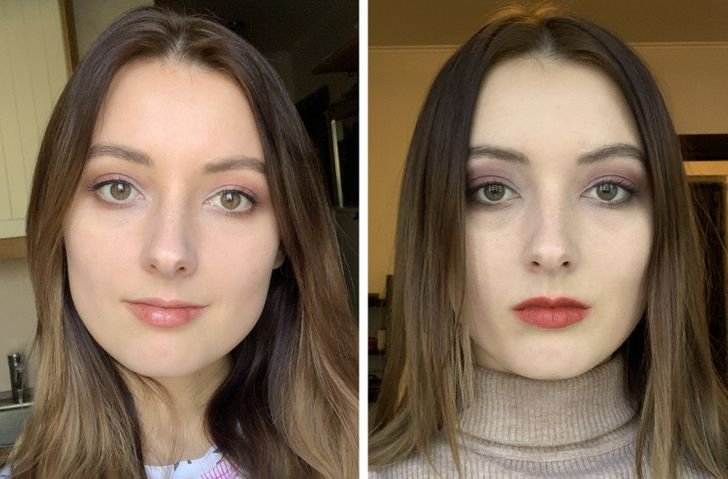 I told my husband about some of the basics and we got started. At first, he traced my eyebrow in a thick line and colored in the rest. We laughed at my new giant eyebrow and then I showed him how to fix it, and the rest was easy. I was surprised because I had read millions of articles that said men didn’t like bright lipstick on women but my husband grabbed my new, bright red lipstick without hesitation.

Then, something completely unexpected happened: I switched my beige turtleneck for a black T-shirt with a black cape but my husband said it wasn’t the way to go. The bright makeup looked good with neutral clothes but with black ones, it didn’t look good anymore. I compared the photos and realized he was right. I had never thought about it before, and I just did my makeup when I felt like it but as it turns out, it can look good or bad depending on what I wear. So now, I’ll ask for my husband’s advice about my makeup. In general, he has good taste, pays attention to detail, and has the ability to combine colors. This is great! 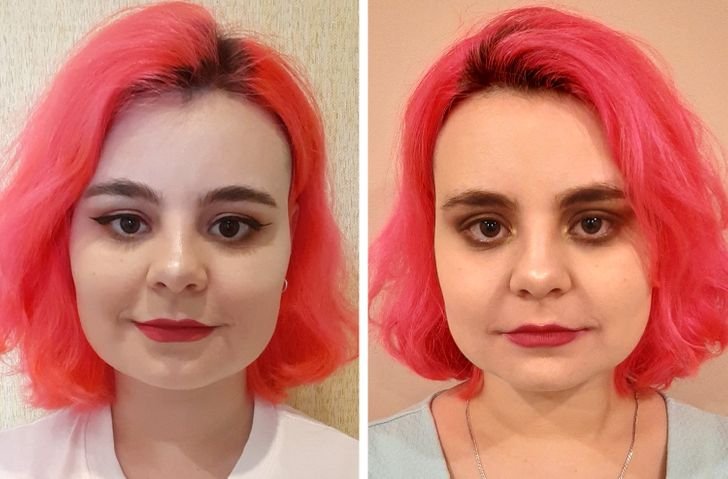 We haven’t learned anything new because we’ve lived together in the same apartment for years. It was fun. We laughed a lot. We were in a great mood all day. I was surprised that my husband made the right guess about my favorite lipstick. 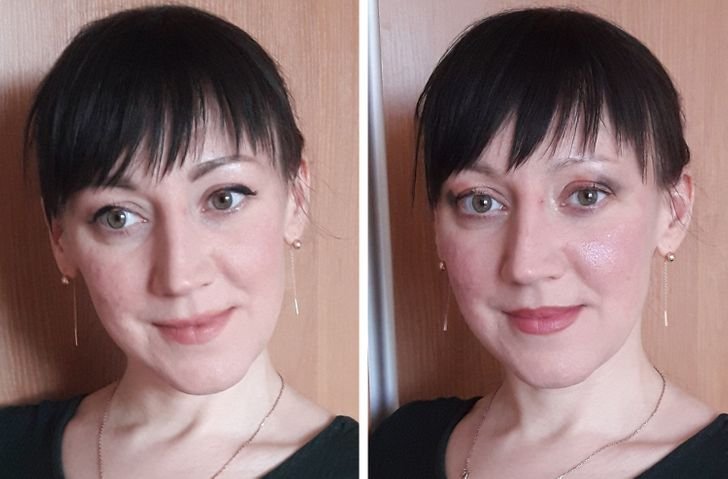 The experiment was great because we spent 40 minutes together laughing and joking.

I don’t know what he learned about me but I was pleasantly surprised that he knew my face so well. He was able to choose the right colors on his own. I think we’ve found him a new back-up job! 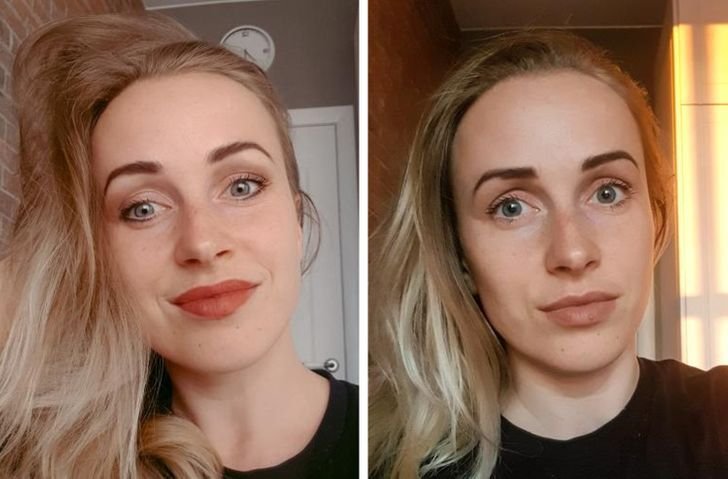 I found out that even though my husband draws well on paper, he’s not good at doing makeup. Even so, it was fun. I’ll definitely ask him to do my makeup for an event some time. 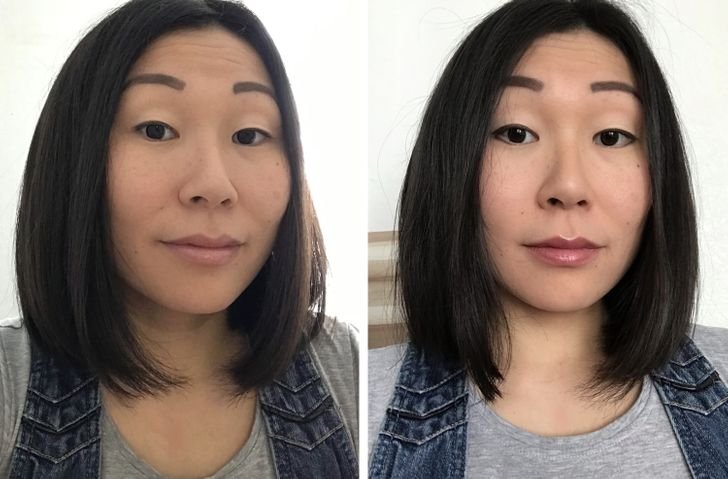 I’m not a fan of bright makeup. In my everyday life, I don’t use much at all. I think it makes me look older than I really am. Going to cafés, someone’s house, or other events don’t affect my light, daily makeup.

My husband has a similar opinion. He doesn’t like it when I have bright makeup on. But just for the sake of the experiment, he tried to draw a wing that made me look like a panda, and then he put lip balm with a more saturated color on me. He asked me to go wash my face afterward.

Again, we learned that neutral shades of makeup are what work best for me. 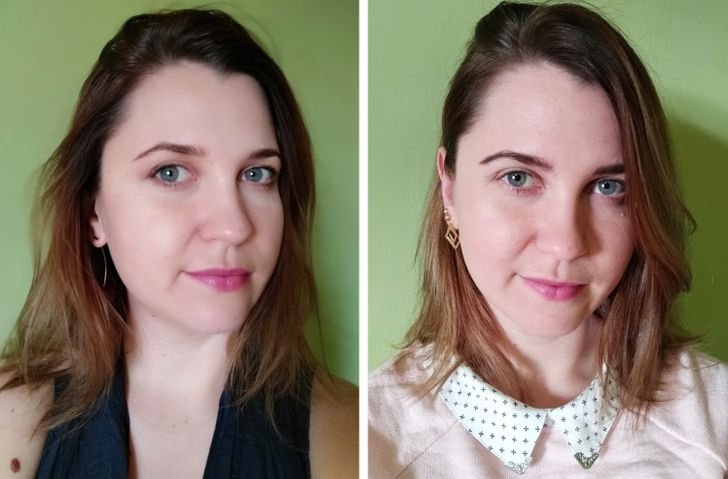 To my surprise, my husband Alex quickly agreed to do the experiment and was even kind of enthusiastic about it. He wanted to do a good job but wasn’t very confident in his skills. At first, he showed me a French clip — he wanted to do this kind of makeup. There was a girl with light makeup on that he thought was made with black shades. He made the first strokes and he was terrified. Of course, I helped him fix it: we wiped the eye and I showed him which shades to use to get the result as close to the clip as possible.

We were laughing the entire time, starting with his first movements when he was spreading the cream around my face and down his entire palms. And it was funny to see that he was surprised that rouges were not supposed to be spread around the entire cheek. He used his fingers to remove the extra mascara from my lashes — and he kept saying that we both probably did that. So it was funny! We fooled around and became even closer than before. And I found out that he liked it when my eyes had brighter makeup on them. 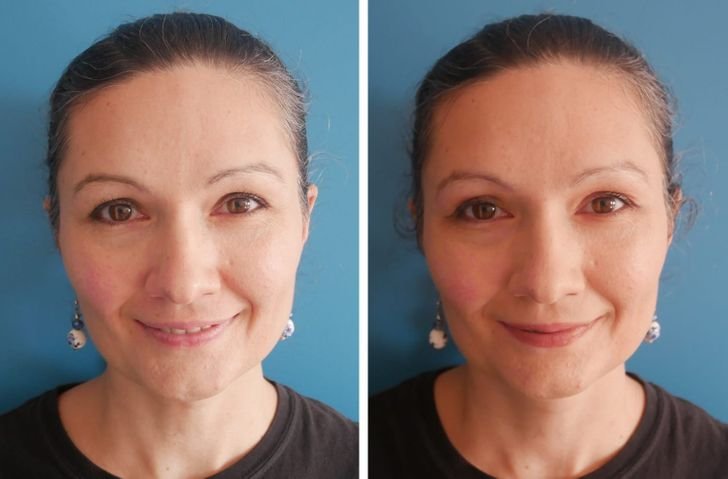 The experiment is great. There aren’t a lot of reasons to put on makeup these days. My boyfriend was very serious about it and had no prejudices about makeup. He is from Marocco and we live in France. We’ve tried it before, but it was a long time ago. And this time, he was much better.

What I learned: He likes it when I look natural and didn’t choose bright shades or bright lipstick, even though he could. I liked it when he was doing my makeup — he was very attentive and careful. I don’t think this was our last time doing this. 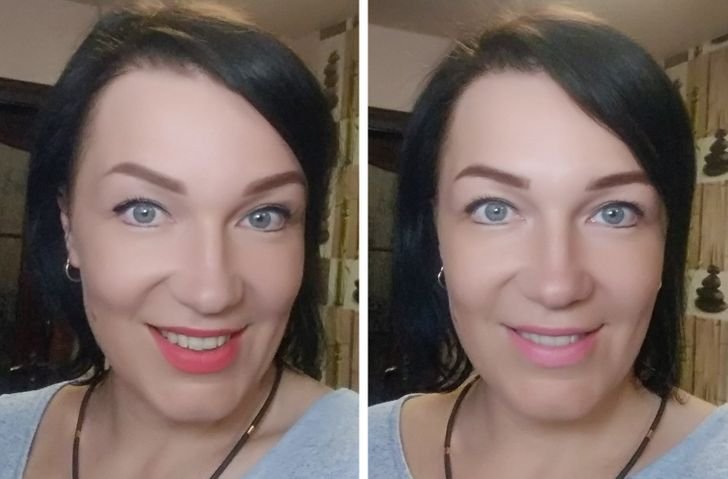 It took a long time for me to convince my husband to do this and he kept saying he had no idea how to put makeup on and argued that if he did it, I would look like a clown.

As a result, it was quite the opposite — he tried not to do any harm and did my makeup in very simple nude shades using as few beauty products as possible. And he said he liked the makeup he did more than what I usually do because it’s more natural. 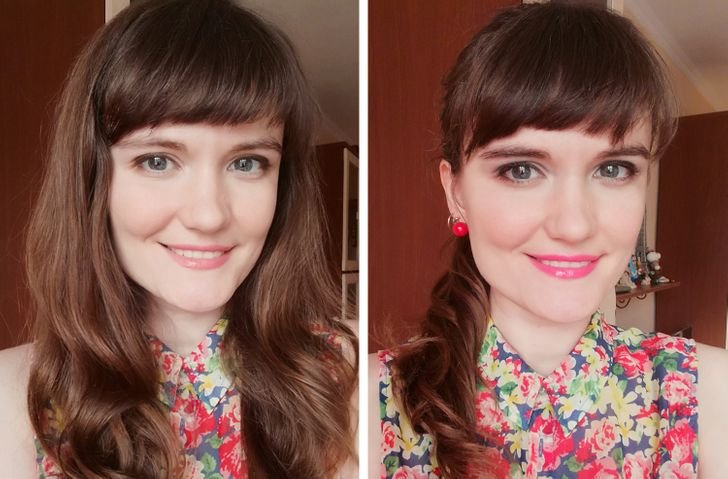 It was fun — my husband had no idea what different things were called, so I just gave him all I had. At first, he put blue shades on my eyes. He took a look at the result and washed it off. He decided that the blacks would be better and he was unstoppable: black, silver, pink… He tried all sorts of different products, colors, and combinations.

But there was a rule: the accent should be either on the eyes or the lips. My husband ignored this completely.

And I always thought that pink lip balm wasn’t for me but it turned out looking quite nice. And maybe I should wear brighter makeup from time to time. But the cutest thing was when I washed off the makeup, my husband said, “I’m so lucky that you are beautiful without any makeup at all.”

Everyone had the same results after the experiment. All of us received some love and care and everyone had fun spending time with their significant other in such an unusual way.

Dear readers! If you liked our experiment, do it with your partners and leave your photos in the comment section below with a small description and we’ll collect all this info in a new article!